Please take a moment to fill out this survey on your gaming habits!

A Creature is a term for the various fauna found across the Boundless universe. 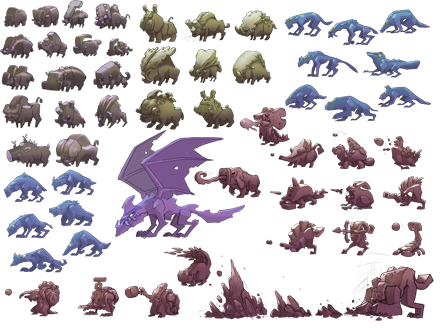 Creatures have a progression of 6 tiers, and in addition may sport Elemental or Exotic progression. For example, a Mighty Shocking Spitter is a Tier 4 range melee Creature with a special shock attack that is likely to drop Shock Shards when defeated. Exotic variants include Creatures with additional Health, Damage, Armour, and Speed buffs.

The following creatures are currently implemented in the game.

When defeated, Creatures may be hit one more time with a weapon and their carcass will drop one or more items. Among the items are the following.

It's comforting to note that creature carcasses are instanced, which means that once a Creature is defeated, each Character in the vicinity can retrieve a set of drops.