Please take a moment to fill out this survey on your gaming habits!

From Boundless Wiki
(Redirected from Character)
Jump to: navigation, search

In Boundless, the player controls a character known as a Citizen.

Players also sometimes informally refer to a Citizen as a character, alt, paperdoll, or toon. 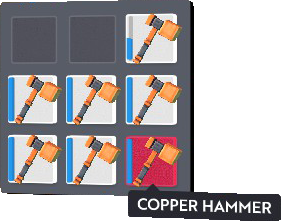 Some copper hammers in a smart-stack.

A Citizen has an inventory space of four rows, 8 spaces each, for a total of 32 spaces.

The inventory is where all items go when they're picked up. Many items and blocks can be grouped into a Smart Stack, which is a special stack of several of the same item type, without having to take up additional spaces in the main inventory. One can see "inside" a Smart Stack by right-clicking on it (on a PC). For example, a Citizen can have up to 9

Stone Heavy Hammers all in one inventory space. Or they could have

Some items of different types but similar functions can be combined together into a single Smart Stack. You can have

Iron Heavy Hammers mixed together in a single stack, for example; but you can also stack

Each Citizen gains a level after obtaining the required number of experience points. Gaining a level results in the Citizen receiving a level coffer in the exchange, which can be opened to receive 2 skill points, some coins, and some additional cubits for use in the exchange. A maximum of 100 skill points can be allocated to a Citizen's skill set but cubits can be exchanged for additional skill sets for Citizens over level 50.

A Citizen has a starting maximum health of 600. It can be improved by spending skill points on the Vitality attribute.

Health is reduced by taking damage from creatures, falling, or environmental threats such as lava or a hazardous atmosphere. When health reaches zero, the Citizen is defeated and must return to the sanctum with an experience gain penalty. The experience penalty may be avoided by using a Reviver Brew or by being Revived by another player.

Health can be restored either through Brews, an epic Skill, or slowly if the Citizen has the Full Up status buff.

The current health status is shown by the green bar in the bottom middle of the screen.

A Citizen has a base value of 600 maximum Energy. It can be improved by spending skill points on the Zeal attribute.

Maximum energy is reduced by hunger. As a Citizen performs actions, hunger will increase, which will in turn limit the maximum amount of energy available, until the missing portion of Max Energy is replenished by Food.

Plots are earned by levelling up; more are gained per level as the total level becomes higher. To claim a section of land, the player first needs to purchase plots in the exchange using

Campfires and extend the reach of both. Plots assigned to a Campfire or Beacon Control are returned to you when they expire or you remove the Beacon Control or Campfire.

Skill points are earned by levelling up and can be spent on Skills.

See the main article on skills for lists of information.[edit | edit source]

Skill points can be spent on: